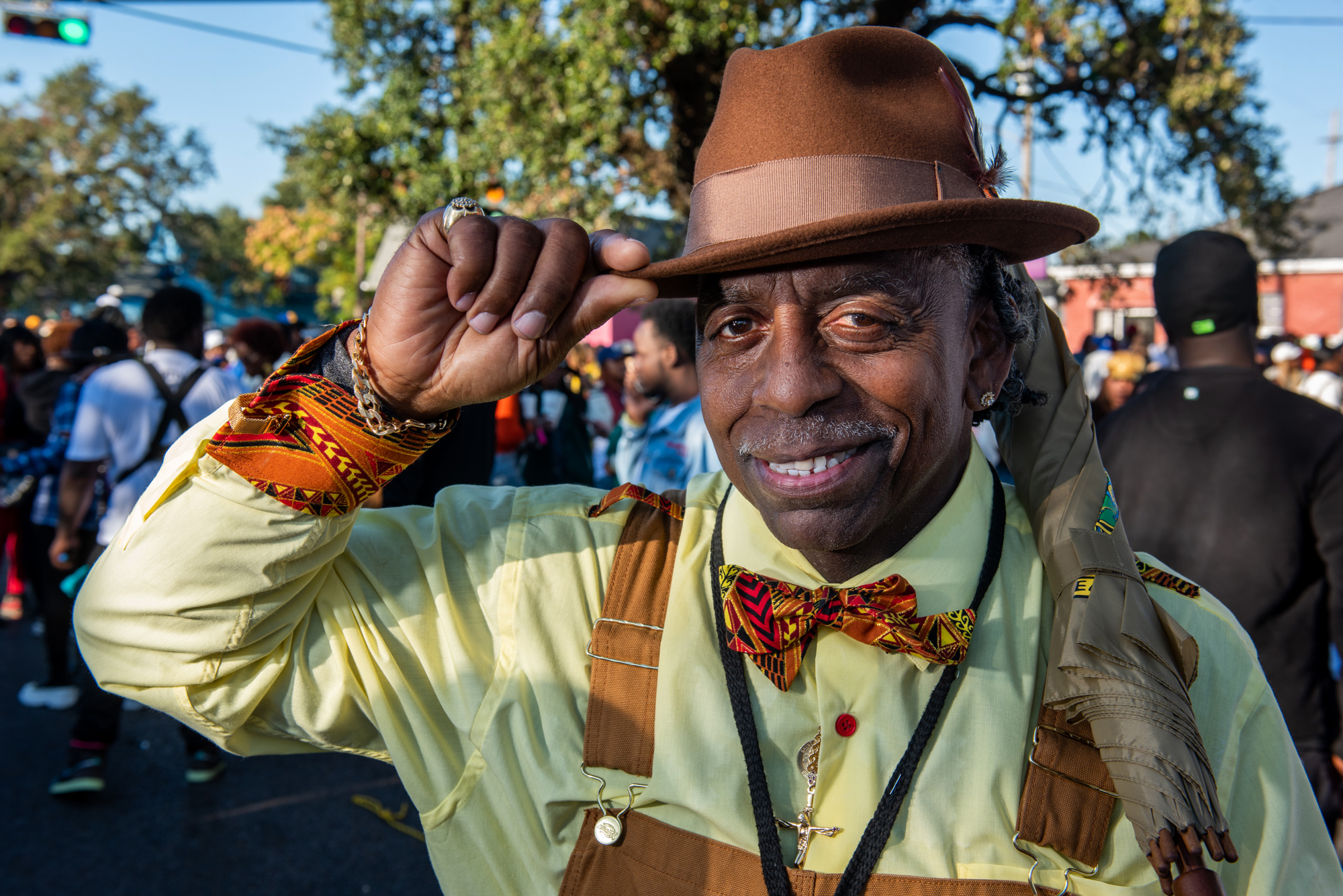 Bernard Robertson of Sudan Social and Pleasure Club loves New Orleans. He helped found the club in 82 with a group of young men in their 20s who had grown up together since the age of 12 through Tambourine and Fan. As kids they played sports in the streets of New Orleans and learned about the roots of the culture, traditions, heritage and community from Jerome Smith and his organization. “We was taught by a brother called Jerome Smith to care, to look out, to want to know how each other are doing, so we had a bond.” When they decided to form their own club, Robertson went in search of a name that came from Africa and could entice those who spoke it to want to know more, and found the name Sudan jumped out at him while reading a book about Africa. “This big old S stuck out in my face, and it had four more letters with it U...D...A...N...Sudan...and I said to myself wow. I looked it up, and it said they had a village, and in that village they had a group of men that would go from village to village dancing for peace. That hit my heart. My heart started running, and I brought it to the club. Me being a little talker, I was able to speak my piece to the club, and the club hollered ‘man let’s go with that name.’”

“This big old S stuck out in my face, and it had four more letters with it U...D...A...N...Sudan...and I said to myself wow. I looked it up, and it said they had a village, and in that village they had a group of men that would go from village to village dancing for peace. That hit my heart.”

Tambourine and Fan is the foundation of Sudan, and motivated them to carry on the style of a traditional old school second line by carrying a fan, basket and umbrella. “We didn’t come up with that idea. We didn’t invent that. We just put a spark to the wheel. The wheel was already there. All we did was came a little different on how to make it.” The pieces were made by Sudan “decorators'' David Crowden, Adrian Gaddis, and Terrence Allen who had all been mentored by Tambourine and Fan’s Melvin Reed. “That part of the club is where we put our foot down. We kick the dirt. We disturb the water. We part the clouds. We make it rain and then make the sun shine. When it comes down to that decoration. You have to be there to see it that morning.”

“Whatever race you wanna call, they was out there. They was hollering for us, they listening to the music, they dance, they drink their little beers, they ate off the food trucks. All that made my day, and that’s the stuff I be looking for year in and year out.”

Dancing through the streets of Downtown New Orleans for the first time in 83 the club brought 35 members, which included kids. Every year they plan their 4 hour parade route around passing by the homes of family members. In total they have only missed 2 years of parading since the club’s creation, and those years were 2005 just after Katrina and 2020 in the height of covid. In 2021 they returned to the streets with 11 members. Impacted by covid and Hurricane Ida, the club’s budget for outfits and decorations were simplified to overalls and umbrellas, which is a style they also wore in 2006. “2021 Due to Covid and due to the storm everybody is hurting one way or another. The loss of a loved one, the loss of property, no job, scared to come out in the street due to they don’t want to get sick, but have to come out in the street because they are suffering just being inside. To see us come out the door is so beautiful, they are looking for something to make them happy, and we are looking for something to make people happy. So for us to come out in these overalls and people still call me today to tell me how beautiful we are just like if we came out in 2019 when everything was alright, and we came out in shoes, pants, basket, fan, and umbrellas, that outfit didn’t have no suspenders, shoulder piece we didn’t have streamers we had two shoulder pieces. For us to come out like that for people to say this parade was just as pretty as that parade, and we tried to stay on budget cause we didn’t have no money. To see that person to see you come to the door that morning, was just fantastic.”

In 2020 Robertson was scheduled for prostate surgery the day after Mardi Gras on March 26, 2020, while covid was making its way around the world. On Mardi Gras day he did his normal route of selling popcorn around the 7th ward while greeting the many friends he normally sees out at that time of year. Focused on surgery the next day he didn’t stay out long, and was thankful that he didn’t looking back on how covid was unknowingly spreading among the community that day. He made it through surgery without catching covid and hunkered down to recover from it while the rest of the world was in lockdown. In a way it made that time recovering easier for Robertson since nothing was going on in the streets of New Orleans. His wife couldn’t go to work, so they started doing regular walks which helped them grow even closer. “Anybody who liked to go have fun, Covid took that away from us. New Orleans, if you think it just messed up the tourists, but you messed up the Mardi Gras Indian, those who get together on the corner and sing songs, or those who sell stuff at second lines, and different things like that. I was blessed in a way with covid because it kept me inside.”

Sudan’s return to parading came on a cool and sunny November 14, 2021. Once the members dressed, Bernard started off the day by circling up the club for a prayer that he leads each year. When the members were ready, they burst out of the Treme Center to the music of Sporty Brass Band to meet a large crowd that had been eagerly awaiting them.  “Whatever race you wanna call, they was out there. They was hollering for us, they listening to the music, they dance, they drink their little beers, they ate off the food trucks. All that made my day, and that’s the stuff I be looking for year in and year out.” For over 5 miles they danced through the streets of New Orleans, and for the final block the members of Sudan came together, arms over each other’s shoulders, relieved to be back at their second line.

Robertson was one of the original recipients of Feed the Second Line in the summer of 2020, and the help came at a time when he really needed it. With respiratory issues and still recovering from surgery, it was a struggle to safely go to the store let alone afford groceries. “Feed the Second Line come through. When you are wondering what could go wrong, but when Feed the Second Lines come through it was ‘man, that on time!’” When Ida hit, representatives from Feed the Second Line were checking in on Robertson before and after the storm. While he stayed home during the storm, roof damage and extreme heat forced him to leave for Texas out of concern for his health. In that same time he was making his way to Texas the organization was patching his roof to avoid additional damage and ease his concerns while away. Since then Bernard has been able to repair his roof and focus on things like second lining. “Whoever helped [Feed the Second Line] to help us: I want to hug.”