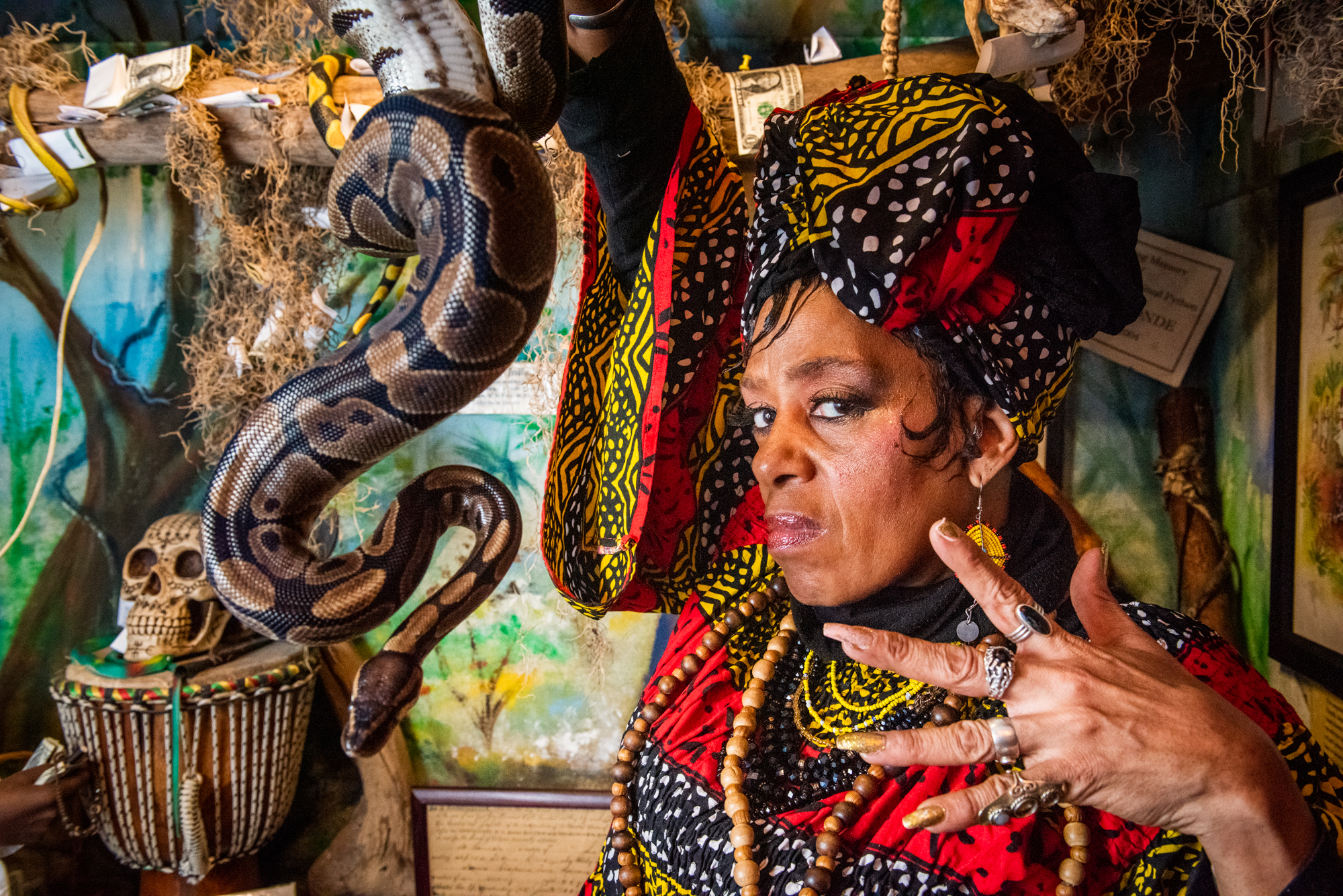 Resa “Cinnamon Black” Bazile has many roles in New Orleans culture. She is a Baby Doll, Voodoo Priestess, and a Masking Indian Queen. Growing up in the Calliope Projects she remembers watching Dolls pass by her home wearing red satin dresses and feather boas, which scandalized her grandmother who made her promise not to wear a boa. In 74 at the age of 14 she wore a homemade raggedy doll costume with her friends that she credits as her first time coming out as a Baby Doll. “Being a Baby Doll was one of my first dreams, and is always my heart.”

“Being a Baby Doll was one of my first dreams, and is always my heart.”

In the 80s and 90s there weren’t many people practicing the tradition of masking as Baby Dolls, which led Cinnamon Black to connect with Merline Kimble and Antoinette K-Doe. The two wanted to bring back the tradition by starting their own groups. Kimble’s grandmother was one of the first Baby Dolls to walk the streets of New Orleans as a Treme Gold Digger, and Merline wanted to restart her family’s group. While K-Doe wanted to start the Ernie K-Doe Baby Dolls, Cinnamon and her daughter sat on the sidelines during these discussions trying to decide what group they would join. In the end she joined both in the tradition, and eventually started her own group under the blessing of Uncle Lionel. “I was told by Uncle Lionel that you need to start your own group. So he and Mr. Al [Jackson] gave me the title called the Treme Million Dollar Baby Dolls. [Uncle Lionel] said, “I think you look like one of my Baby Dolls.” With Lionel’s blessing, Al Jackson gave Cinnamon the club’s 1924 chart to make it official. “That made my whole dream come true, but it wasn’t complete though. Cause we were just a few girls starting to be Baby Dolls, and then the storm came and then we had to struggle to try to get it to come back. Now today we are fortunate there’s fifteen or twenty more groups of Baby Dolls, and now my dream has come true that dolls are all over the city.”

“[Uncle Lionel] said, “I think you look like one of my Baby Dolls.” That made my whole dream come true.”

In 80 Cinnamon Black won a Marie Laveau look alike competition that started her down the road of becoming a Voodoo Priestess. “They say I look like [Marie Laveau], but I am me and she is she.” Because of the competition she began working at the New Orleans Historic Voodoo Museum in the French Quarter at 724 Dumaine St. She started as a dancer doing rituals with snakes, and then trained under other Voodoo Priestesses of the time until she became one herself. This was a good fit for Cinnamon since she had grown up in a spiritual household where her grandfather taught ministers to be ministers. Today she still works at the museum.

“Going in the streets to go meet with my Dolls, I was always running into FiYiYi and we would always have the same color on. And I knew that I didn’t tell them what I was wearing and knew I wasn’t in their camp at least when they got to the part about their colors. But we always ended up with the same colors so when Coach stopped me he said `you know Cinnamon you really need to be with us’ after about 4 or 5 years of the same thing happening.” She was also encouraged to join the tribe by her long time friend and the tribe’s Big Queen Kim “Cutie” Boutte. After a number of years supporting the tribe by helping with sewing, carrying crowns and anything else they needed of her, she became an official member of FiYiYi’s Mandingo Warriors as Baby Doll and Voodoo Queen starting in 2005. Eventually she started sewing her own suits and in 2015 was crowned 2nd Queen by Big Chief Victor Harris after meeting Yellow Pocahontas Queen Gina Montana. Over the years since being crowned 2nd Queen, her suits went from a mix of Indian and Baby Doll to full Indian suit and a separate Baby Doll outfit. On Mardi Gras day she comes out in the mornings as a Baby Doll and by noon transitions into her Queen suit to join the tribe.

Being a Queen with Kim Boutte was a natural fit. The two had run track together in high school, and did everything together from church to going to the grocery. They had even come to realize that they were related after attending each other’s family reunions. They would help youth in their community and teach them about masking. In 2020 Boutte was tragically shot and killed while attending a funeral. The loss weighed heavily on the entire Indian community, and especially on Cinnamon who became Big Queen through the tragedy. “The experience I had with Big Queen Kim Boutte is one that will never be replaced. She was a kind soul. I really miss her.”

“Culture and music does come with change, and people come with change. We are going to strive to keep the music alive, the culture alive in the city, and also to protect its principles.”

Living through the pandemic has presented its challenges, and Cinnamon Black like most of us is learning how to do things in new ways. She is thankful for Feed the Second Line to have stepped up in this time to support and protect the elder culture bearers in New Orleans. She has been a fan of the Krewe of Red Beans for many years, and through it discovered a love of creating art with beans. With the Krewe’s creation of Feed the Second Line she plans to support its effort however possible for the rest of her life.

As a long time culture bearer it is very important to Cinnamon Black to pass on the traditions to the next generation, and to maintain them. Over the years she has seen how the traditions have changed as new people have come to the city, and youth have taken over from elders. “Culture and music does come with change, and people come with change. We are going to strive to keep the music alive, the culture alive in the city, and also to protect its principles.”