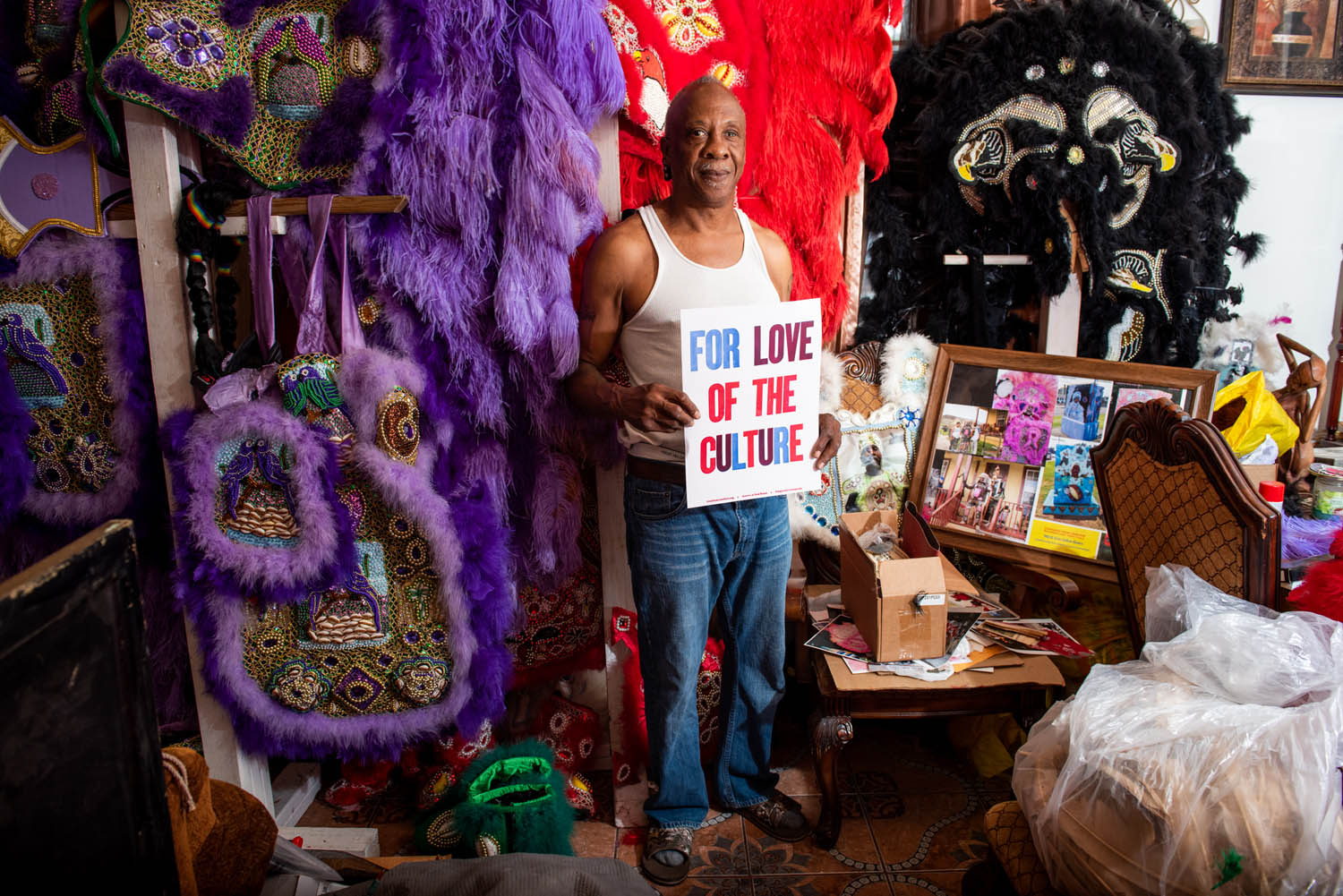 Al Polite, born in July of 1958, grew up in the 7th Ward of New Orleans. For the last ten years he has been masking with the Spirit of FiYiYi and the Mandingo Warriors, but has been running with the tribe behind the scenes since his youth. As a child he found his path in life through Jerome Smith’s Tambourine and Fan and the mentorship of Collins “Coach” Lewis, Tootie Montana, and his Big Chief Victor Harris.

Growing up in the 50’s was a profound time for the 7th Ward neighborhood. “Back in the 50’s we really had a lot of positive stuff and positive people that were willing to help us, and the neighborhood was really family.” Polite’s parents were known for giving out food and meals, and by age 8 he was involved in Tambourine and Fan which mentored many of the children in the area. “I came up in the early time of Tambourine and Fan, and I loved the moment. It really showed us the path on how to be a family and a neighborhood.” People who grew up in that time still remain close today through that bond.

In the 70’s Polite was doing odd jobs like mowing lawns for neighbors and selling water, and in 81 he started a series of jobs that led him to his own flooring company and eventually a contracting company. He employed friends and family including his mentor Coach. One of his latest projects has been restoring the Thompson United Methodist Church in the Bywater. His family helped build the church in 1898, and have helped maintain it since. Polite has donated a lot of time in recent years to restoring the church. “It’s not about the money for me and my crew. The church was in bad shape after [Katrina] hit. We are a small congregation, but powerful. My ancestors helped build this church.”

Polite first masked with the Spirit of FiYiYi as a Wildman, and then moved to the role of Spy Boy in 2012-2013. His first suit as Spy Boy in 2013 was a dedication to Coach, who had passed away in 2011. In 2015 he came out in pink as a tribute to his wife, who passed away from cancer. “I was trying to figure out what I was going to do for my wife...So I said breast cancer, and that’s where it was.” He made patches of medical symbols, pink ribbons, and included colors that represented the different types of cancer. The suit was profound for many in the community, and is still requested to be worn at events today. He plans to one day donate it to a medical charity, in the hope of inspiring others to give for the cause. His masking has led many in his family including his grandson, nephew, niece, great nephew, and others to join him in the tradition over the years.

“It means a lot to be masking and keeping the culture alive, with other people having our back.”

Covid-19 was devastating for his family and community. “I lost a lot of family members young and old...My work slowed up. Then the Indian thing, we couldn’t mask, so I did a little bit of sewing but I ain’t do much because the places were closed and money wasn’t generating...The covid hit hard and it's still hitting. Because it just ain’t back right.” Feed the Second Line helped a lot this time. “By giving food that shows love, and after showing love you still give love...Everybody that bring that food, or call you on the phone. Man you can just feel the spirit...I thank god for them and pray that the lord keeps them in my life. It means a lot to be masking and keeping the culture alive, with other people having our back.”

In need of knee surgery in both knees for years, Polite finally had his first replacement surgery on June 15, 2021 after finishing up work on his church in the days before. While his knees had been giving him pain for a longtime, he found that when masking the spirit of the tradition would take away the pain. He hopes to recover over this summer in time to join his tribe at Jazz Fest in October.